Manchester International Airport – The Gateway to the North Manchester Airport was initially known as Ringway Airport when it officially opened on the 25th of June in 1938. The airport was named Ringway after a small village located at the western edge of the airport. The airport underwent a major expansion to double the size of its second terminal after serving a record-breaking 27.8 million passengers in 2017. The first elements of the expansion opened in 2019, with the rest slated for completion in 2024. The expansion will enable Terminal 2 to handle 35 million passengers, increasing the airport’s overall passenger capacity to 50 million annually with its two runways.

Manchester International Airport is one of the busiest airports in the world; as such, you might want to make use of our concierge services to skip the long queues, avoid the busy crowds, and get the VIP treatment during airport procedures and formalities. Book our Meet & Greet services to ensure a hassle-free and comfortable experience at Manchester International Airport.

A Brief History of Manchester Airport

Construction on the airport started in Ringway parish on the 28th of November in 1935. The airport was partially operational by June 1937, with the construction being completed on the 25th of June in 1938. Its northern border was Yewtree Lane, east of the crossroads marked “Ringway”; and its southeast border was a little west of Altrincham Road. KLM was the very first airline to launch commercial flights to Manchester in 1938.

A Royal Air Force station known as RAF Ringway used to be where Manchester Airport is today. RAF Ringway was important in military aircraft production and training parachutists during World War II. After the war, the base reverted to a civilian airport and gradually expanded to reach its current size. Manchester Airport quickly became Britain’s second-busiest airport in the 1960s, losing only to Heathrow Airport.

Air France began operating from Manchester Airport following the commencement of peacetime passenger services in 1946. Air France remains the airport’s longest continuous operator to date, celebrating 75 years of service in 2021. In 1971, the airport reached a new milestone after handling over 2 million passengers in one year. The following year saw the opening of a link road connecting the airport to the M56 Motorway, improving road access from Manchester, North Wales, and Cheshire. The airport’s name was officially changed from Ringway to Manchester International Airport in 1975. 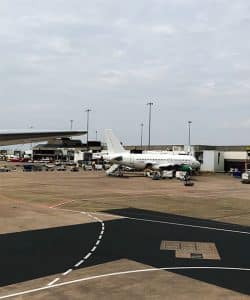 Traveling through the airport can be a difficult and exhausting experience due to crowds, long queues, time-consuming procedures, and constant delays. Fortunately, the airport offers passengers a chance to rest, relax, and recharge in its luxurious lounges before leaving the airport to explore all the breathtaking sights Manchester has to offer. Escape the hustle and bustle of the airport and relax in luxury by using airssist’s selection of premium concierge services.

Experience the beautiful Manchester Airport in a new way at the Aspire Lounge. Take in the incredible view of the busy airfield, look out over the apron, and catch sight of some of the world’s biggest airplanes as they land or take off. The Aspire Lounge is always evolving and developing to offer visitors the best experience imaginable, and with 30 years of experience under its belt, guests are surely in for an unforgettable experience. The lounge is designed to help guests relax and unwind by providing them with luxurious amenities and first-class service. The Aspire Lounge features private work booths that act as fully kitted-out offices for business travelers. The lounge also offers family booths, each equipped with a Smart TV and tableside charging facilities, so you can kill time with the family while you wait for your flight. The lounge also offers complimentary foods, drinks, magazines, newspapers, and high-speed Wi-Fi, allowing you to treat yourself while you catch up on emails, stream the latest episode of your favorite show, or connect with your friends on social media. To get to the Aspire Lounge in Terminal 1, proceed through Duty Free following Executive Lounges, turn left between Next and Dixons, and finally take the stairs to the floor above. To get to the Aspire lounge in Terminal 2, proceed through security and toward the main departure hall, move through the Biza Duty Free Shopping and into the gate area, then turn left, go up one level using the stairs or lift, then finally turn right and walk down the corridor, and the lounge will be right in front of you. Book Aspire Lounge access when traveling to/from Manchester today!

The Escape Lounge is an award-winning lounge that offers friendly service, a selection of international foods and drinks, dedicated spaces, and first-rate services designed to relieve you from the hustle and bustle of the busy terminals. The Escape Lounge has been described as a relaxing oasis by guests from around the world and is open every day from 4am to 5pm. During this time visitors can enjoy the finest foods and drinks prepared by world-class chefs ranging from chicken and meat dishes to a selection of cakes and other baked goods. The lounge’s complimentary bar is always stocked with different types of tea, coffee, fresh juices, wines, beers, and soft drinks. The lounge also offers free high-speed Wi-Fi, charging facilities, and TVs for your entertainment and convenience. Rest, relax, and experience the Escape lounge’s warm welcome before exploring the beautiful city of Manchester. The Escape Lounge is available at Terminals 1, 2, and 3, but the lounge at terminal 3 is temporarily closed and will remain so until further notice. To get to the Escape Lounge at Terminal 1, proceed through Duty Free, turn left after Next retail store, go up the stairs and finally follow the signs leading to the lounge. To get to the Escape Lounge at Terminal 2, simply follow the main walkway through Duty Free and follow the signs to the mezzanine level where you will find the lounge next to the Bridgewater Pub.  Book Escape Lounge access when traveling to/from Manchester today!

Step into the world of luxury where attention to detail, elegance, exclusivity, and tact are the primary focus. The 1903 Lounge is delicately designed to change the way you see the world by providing services specifically tailored to you. The lounge’s menu is systematically crafted to emulate a fine-dining experience with every meal. Enjoy international foods and beverages prepared by the lounge’s in-house chefs using only the best and freshest ingredients. Celebrate your journey at the bar, which includes wines, ciders, beers, spirits, champagnes, soft drinks, and juices of the highest quality. There’s no better place to unwind than the 1903 Executive Lounge, where your satisfaction and leisure are ensured thanks to the incredible views, lavish seating, and luxurious services. The 1903 Executive Lounge is available at Terminals 1,2, and 3 but Terminal 1 and 3’s lounges are currently closed until further notice. To get to the 1903 Executive Lounge at Terminal 2, simply proceed through the security checks and Duty Free area while following the signs for premium lounges, then take the stairs or lift just before Dixons to the Executive Lounge level where the 1903 Executive Lounge is located. Book 1904 Executive Lounge access when traveling to/from Manchester today!