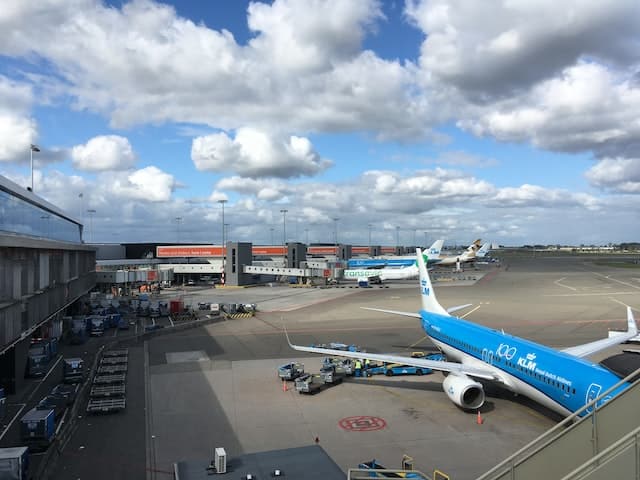 No. of terminals: 1 single terminal

Amsterdam Airport Schiphol, known informally as Schiphol airport is the main airport for international travelers in the Netherlands.

Its located in the North Holland provinces municipality of Haarlemmermeer, 9 Kilometers southwest of Amsterdam. It’s the 3rd busiest airport in the world by international passenger traffic in 2021.

In addition to Corendon Dutch Airlines, Martinair, Transavia, and TUI fly the Netherlands, Schiphol serves as the hub for KLM and its regional affiliate KLM Cityhopper. EasyJet has a base at the airport as well.

The airssist team knows how to give you a memorable and sumptuous experience from the moment you enter the airport until you reach your destination.

The €500 million extensions of Amsterdam airport Schiphol will result in a new pier, expanded terminal, and parking garage by 2023.

The Idea of a Single Terminal

The terminals of Schiphol airport are all connected by docks. As the Netherlands is a member of the Schengen European area, an open border accord, the terminal is divided into Schengen and non-Schengen parts. The airport’s Schengen area is “inside” the Netherlands.

When entering or leaving the Schengen region, you must go through passport (border) control (this includes destinations in the UK, Ireland, US, Asia, and Africa). So, technically, the non-Schengen area is outside of the Netherlands. For many nationalities, a valid Schengen visa is required for entry into the Netherlands.

Comfy Chairs – there are extremely comfortable lazy recliners scattered throughout the terminal (beyond security), especially on the upper level.

They are in high demand, making it challenging to find one that is available. If you do, be careful not to nod off because you don’t want to miss your flight.

A shower cabin costs €19.50 and comes with soap, shampoo, a shower cap, towels, and a hair dryer. The YOTELAir, which has two shower cabins accessible, is located in Lounge 2 (next to dock D) and charges €17.50 for an hour of use.

Arriving travelers have the option of taking a shower at Schiphol by going to the Sheraton Hotel, which is located close to the main public arrivals hall and train station. You may get a day pass to the hotel’s fitness and spa facilities, which include rainforest showers.

Museum – there are 8 tiny interactive exhibits from the NEMO Science Museum at Schiphol that are available for free and are located on Holland boulevard between lounge 2 and 3. On holland Boulevard, there is also an exhibition by the Rijksmuseum Schiphol including works by Dutch Masters from the 17th century.

Airport Library – On Holland Boulevard, Schiphol provides a small library space with a range of books as well as iPads and touch screens.

Running A Business – meeting rooms (public side) are accessible at the office operators, which are close by, or the Regus Schiphol Airport Meeting Center (TOO)

First off, it should be noted that Amsterdam Schiphol likely has a little smaller lounge capacity than other airports of a similar size.

The ambiguous lounge number is typically used to identify Schiphol lounges. You can either heed the instructions on the signage or look at airport maps to determine the exact locations of the lounges.

All paying passengers, including those traveling in economy class, have access to these Aspire lounges. Access is priced starting at about €30 when booked online.

Elite members, including Flying Blue Platinum and Gold members and SkyTeam Elite Plus members with up to one visitor, are entitled to free entrance. To visit the lounge, KLM economy travelers must pay a fee (€65 for Lounge 52 and €50 for Lounge 25) or use Flying Blue Award Miles.

At Schiphol, residents of the European Economic Area (EEA) and Switzerland can subscribe to Privium. Members can use an iris scan to pass past Dutch passport control.

The American Express Platinum card, issued in the Netherlands, comes with a free Priority Pass and Privium Plus subscription.

A passenger flying on any airline can purchase a VIP service at Amsterdam Schiphol airport for arrivals, departures, and transfers. This grants entry to a limited number of private lounges in the VIP center just for Schiphol travelers. Food and drinks are offered in lounges.

It is possible to make reservations for groups of up to 20 people. All transports to aircraft are made in a luxury sedan, and VIP access has its security line. The VIP center is located in Arrivals 4 at the Excellence Parking garage at the end of Jan Plezierweg.

In addition to several Schiphol airport services, there are 3 on-site hotels are accessible by foot from the terminal building:

This hotel is quite handy because the airport station hall exit is about 50 meters away. Large and comfortable rooms, with an atrium bar in the common areas.

This design hotel, which offers compact, contemporary, all-white rooms and complimentary Wi-Fi, is a great low-cost option. A 24-hour lounge bar with excellent service and unique decor. Located about a 5-minute covered outdoor walkway from the airport terminal.

The 433-room Schiphol Hilton is connected to the terminal by a covered walkway and is a 5- to 7-minute walk away. The hotel features a wide atrium, free Wi-Fi, spacious rooms with great airport views, and free parking.

You will be met by your assistant as soon as you land at Amsterdam Airport Schiphol (AMS), who will take care of all of your airport requirements and transport you to the FastTrack lines so you may avoid lengthy check-in, security, and customs lines.

There are numerous ways for travelers to get to and from AMS airport. Despite the fact that taking trains, metros, and buses might be affordable, using them can be challenging if you have luggage or are unfamiliar with the network.

Our expert team of corporate travel planners from/to AMS airport is available and prepared to assist you and your group in making the journey as pleasurable as possible.