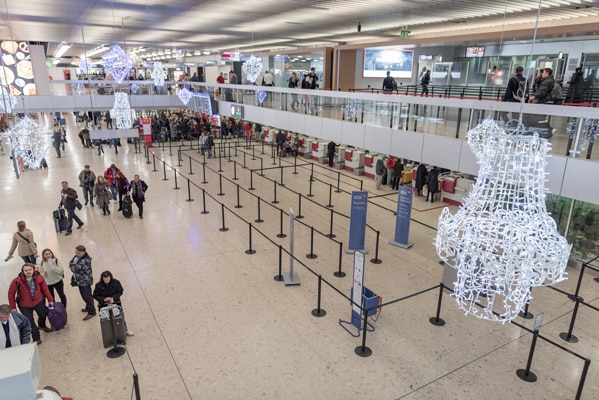 Geneva Airport formerly and still unofficially known as Cointrin Airport, it is the international airport of Geneva, the second most populous city in Switzerland. Geneva Airport has the service of Priority Lane which allows priority access to security checks without standing in traditional lines in addition to a lot of unique facilities for passengers that distinguish Geneva Airport.

What are the major airlines at Geneva airport?

Geneva Airport is a hub for easyJet Switzerland and a focus city for Swiss International Airlines, being the two largest companies.

In addition to British Airways, Flybe and Jet2.com and so many other airlines flying from and to Geneva Airport.

What are the Facilities provided at Geneva Airport?

How many private lounges are in Geneva Airport?

Geneva Airport GVA lounges are open to passengers at a reduced cost no matter the airline they are flying with. Many lounges are equipped with comfy seats, free snacks and an assorted selection of alcoholic drinks, spirits and liquors. While lounges are somewhat different, some of its main features are: Food (buffet or snacks), Unlimited drinks, Wi-Fi, Comfy seats, Showers.

Here are the private lounges in Geneva Airport:

What is Priority Lane?

What are airssist services in Geneva airport?

airssist provides wide range of services at Geneva Airport, where is has a high qualified team in the Meet and Great Service, a lot of connections to ensure a safe and smooth flight from departure, arrival to lounge on ground in the world of luxury. We can’t forget to mention the facilities provided by airssist during the covide-19 in finalizing the airport procedures during the pandemic .